Well 1-1 is no good and looking back I should have laid off of the Suns/Bulls game. The Bulls are a proud team and wouldn't turn in two stinkers in a row. As a handicapper it is important to understand the human side as well as the numbers side of things. Hopefully I do better tonight.

Nebraska @ Michigan (-3): I see Michigan bouncing back from their loss at Indiana.
BC @ Virginia (-3.5): Virginia is legit as one of the best defensive teams in the country. They should have little problem with the Eagles who struggle to score on the road.
BC @ Virginia UNDER (133.5): See above
Illinois Chicago @ Wisconsin GB (-5.5): Green Bay is the dominant team at home and the Flames...are just terrible.

Pistons (-3) @ Magic: Detroit has been struggling lately however they had a nice 2 game win streak going before losing a close game to Miami. The Magic on the other hand have lost 5 out of their last 6 and rank near the bottom of the league in most categories. The one that stand out to me is rebounds. The Magic rank 22nd while Detroit ranks 7th. Here is where the Pistons win the game.

Celtics @ 76ers UNDER (204.5): I know it's a bit risky to take the under with the 76ers but the Celtics are ranked 9th in points allowed and 26th in PPG. The last time these teams played each other the total was 189. Finally in the last 6 games the Celtics averaged 90 PPG and the 76ers averaged 99 PPG.

Lakers (+7) @ Cavs: I know I've said before that you can't trust the Lakers but let's look at some numbers. They covered last night against a pretty good Minnesota team. They are 22-17 ATS as a dog and 14-13 ATS as a road dog. The Cavs are 4-13 ATS as a favorite and 4-9 as a home favorite. The line opened at 6.5 and has gotten as high as 7.5 so everyone is backing the Cavs. Granted neither team as gotten a win in quite awhile and the Cavs might pull one out, but I can't see either team winning by more than 4 or 5.

Lakers @ Cavs UNDER (208): Both teams are slumping and will struggle to score. The Lakers are averaging 103 PPG in their last 6 and the Cavs are averaging 92.

Suns (+7.5) @ Rockets: Here is that human nature thing. The Suns like the Bulls are a proud and capable basketball team whereas Houston is not. I think the Suns were surprised at the level of intensity the Bulls played with and reminded that you can not take a night off in the NBA. I see them giving the Rocket's everything they can handle.

Hawks (+2.5) @ Pelicans: Atlanta should have a much easier time on offense tonight after playing the Pacers last night and almost covering. I see the Hawks getting a lot more scoring opportunities than last night and that will be the difference. Finally the spread has been rising all day so I like the fact that I'm on the other side of the public.

Bucks @ Nuggets UNDER (209): Bucks can not and will not score but 97 points their PPG average in their last 6. The Nuggets have been averaging 107 PPG, yes it's a little close but the Bucks have a ton of people out and I just don't see them scoring much and if Denver plays down to their competition like they normally do then it will be a low scoring game.

This section is devoted to all the free picks I receive on a daily basis. As some of you might suspect free picks are usually garbage. Why? Cause they are free! So I'm going against every single one and tracking it here. 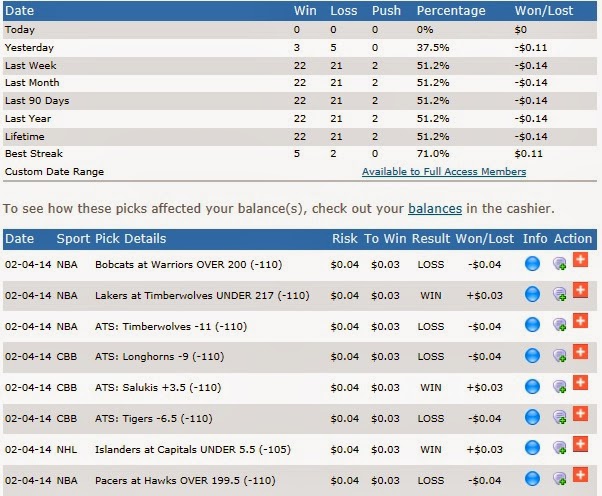