4-2 last night thanks to a add in the NBA which is pictured below. 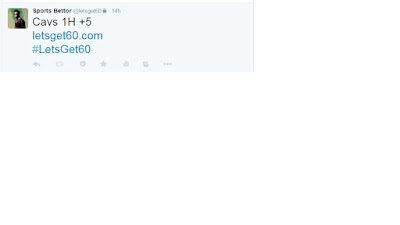 I did go 60% or better and I did win $1.44 but my two loses were extremely frustrating as both overs feel short thanks to pathetic baseball and way way too many LOB.

The Twins/Rangers game was especially frustrating as 4 runs were scored before the third but then bot teams decided to mail it in at that point. The Giants on the other hand are just flat out garbage right now. In their series with Arizona they let C. Anderson, A. Webster (first MLB start) and Ruby De La Rosa hold them to 2 runs. Yes that isn't a misprint 2 freakin runs!

Iv'e been intrigued by the concept of volume betting. I feel I've dabbled in it in the past but never fully committed to it for an entire week. Well this week is the week!

Concept is simple make a bunch of valued picks (taking mostly even money to dogs) put a little bit on each and hope for 60% or better.

Rodon and the W. Sox are +173 against Liriano who is suspect at times. I like the under at 7 as well.

Reds +176 against a suspect pitcher in Sanchez.

Phillies over +200 against a fly ball pitcher at homer friendly Camden Yards. I like the over at 8 as well.

Gio on the mound with Harper DTD against a decent pitcher in a run depressing park. Under 7 runs is likely

Braves (+155) who are tops in OBP and 3rd in wOPB over the last 14 days against a Red Sox team that has lots of pitching issues. Love the over here at 8 as well.

Jays/Mets OVER 7.5 I think we all can agree that this one might be done by the 5th inning.

I'm a believer in Tanaka and the RL

Changing my tune on the Cup. Hawks win it at home!

Rockies (+168) are another team with a decent pitcher.

I like the Brewers at almost even money against a KC team that is struggling at the plate.

Twins with a decent pitcher (+141) against Lackey? Yes please.

Zona (+131) with a decent pitcher and decent offense against a flyball pitcher.

Hahn is a gas can and so can Ross be at times. 7 runs is not out of the question.

As we saw last series the Giants can not score plus the Mariners are in the bottom 5 in wOBA, runs scored, and strikeout rate in the last 14 days.