Back from the dead and ready to change it up...and what I mean by that is I'm spending WAY too much time across 4 soon to be 5 platforms. This is resulting in a lot of time spent documenting the same plays over and over again, and posting different records that are confusing to follow.

From this day forward the only plays, records and units I will be tracking on this blog will be from CapperTek.

No more posting plays from SportsPlays and no more posting the dimes and nickles I'm losing or winning. It's all about the units and it's all about 3rd party documentation. If you want to see my picks  follow me on Twitter @letsget60 or go to my CapperTek page.

If you want to see how I'm doing in a certain sport over a certain time period please use the CapperTek widget above or hit my CapperTek page.

I'm streamlining this  to shave off the minutes like Northwestern shaves points. I need to be more efficient with my time so I can devote more to the art of capping and the write posts that nobody reads.

Tonight is the return of Fight Night and we have a awesome card headlined by the top 2 women in the sport squaring off. @DrJayh has his picks below putting his 248-141 record on the line once again. 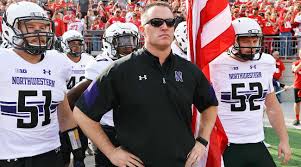 I'm still upset about the NW game last night and I got to get it out.

Here is the situation...

Vegas' biggest decision was Kentucky. EVERYONE was on NW so much that it moved to 9.5 before kickoff. Vegas needed Kentucky in a bad way.

So here we go...NW up by 7 around 2 minutes left in the game on their own 35-40 yard line. It's 4th down. Remember Fitz is a defensive guy that will go for it on 4th down but usually does it on the opponent's side of the 50. So what does he do? He goes for it on 4th down.

I don't mind this decision but what is shady is that he did not give it to his best player, Jackson, he called a QB sneak about a yard and a half from the 1st down. The spot was shady as well coming up short. Kentucky of course scores a TD goes for two and misses. NW backers get fycked. Vegas wins.

The decision from a defensive minded coach to go for it and not to punt it deep in their own territory and not giving the ball to Jackson just didn't make sense to me. The spot solidified it. #Shady

Louisville (-6.5). LaMar Jackson's last game for sure against a team that lost it's QB and coach. I think Louisville will send Jackson out as a champ.

Penn St (-2). I was on the fence on this one until I read that Barkley wasn't going to make a decision about the NFL until after the game or up until the last day to declare. I think this speaks volumes to the team. If Barkley isn't thinking about anything past this game I gotta believe that the rest of the team is just as focused. I think Barkley will have a nice day against Washington's stout defense much like Stanford's Bryce Love did and Penn St gets it done late.